The Kennebunk, Kennebunkport & Wells Water District (KK&W Water District) is a quasi-municipal water utility that was established in 1921 by an act of the Maine State Legislature. The service area, the second longest in Maine, extends 25 miles along the York County coastline and includes the Towns of Kennebunk, Kennebunkport, Wells, Ogunquit, Arundel and portions of Biddeford and York. Within these communities, KK&W Water District provides quality water service to a population that varies seasonally from about 28,000 to more than 75,000. The 40 employees are dedicated to the mission, which is to provide the highest quality of water and customer service at the lowest reasonable cost.

Employees with KK&W Water District have used a Venturo CT2003FB crane for several years to load and unload an 80-pound generator and a 120-pound test pump. Mark Lank, mechanic, said the Venturo CT2003FB works well. It is a heavy-duty, high-torque, high-speed electric winch (1.8 hp) with manual rotation, manual extension, and a folding boom. It has a 2,000 pound lifting capacity and a 6,000 foot-pound rating. 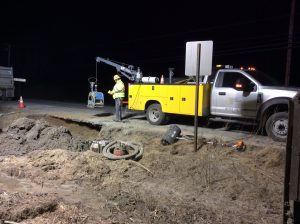 “Although we are not picking up anywhere near what it’s rated for, we use the Venturo CT2003FB daily to minimize the risk of back injuries,” Lank said. “It has been great.”
A second crane was needed for similar loading and unloading uses. Messer Truck Equipment in Maine recommended the Venturo ET6K. The Venturo ET6K has a capacity overload shut-off system, 50 feet of 3/16″ aircraft-quality wire rope, remote pendant with 20 foot cord, load block with swivel hook and safety latch, a master disconnect switch and a 25 foot battery cable.
The KK&W Water District uses the Venturo ET6K daily to load and unload a large compactor stored in the back of the truck. “Depending on where the truck is parked we may need to lift the compactor off the side or move it out the back,” Lank said. The Venturo ET6K is also used for a variety of other activities including using the crane with an extension to get out over the snow bank or reach out over a gap and pull the compactor part over a fire hydrant in the ground.

“So far the ET6K has been awesome,” Lank said. “We are able to use it with a one-man show where the crane functions as a second person. It works exactly as we want it to and needs only one person to operate it. We are very happy with it. We should have gotten it a long time ago.”